The Zone of Jewish Engagement

In digital speak, engagement means an interaction between people or organizations. Ok. Online, and usually on social media. It’s sought after because it leads to SWW (stuff we want): loyalty, donations, trust. My friend Miriam has put it so elegantly, she’s been memed! 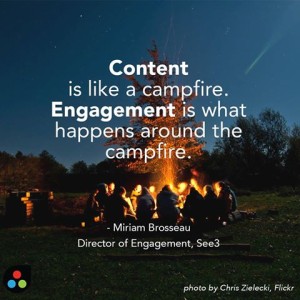 I think a lot about how we interact Jewishly. And how to bring along digital engagement for the organizations I admire. Innovation, social media, new thinking for long-time and just sprouted do-gooders – that’s where I see potential.

So I emailed and handful of creative, vital and smart Jewish thinkers with this,

Without thinking too much, send me a one-liner (“Personal Tweet?”) about what Jewish engagement means to you.

To be fully engaged in something is to be in a state of flow, to be in the zone, so that nothing else matters. Athletes experience it, as do musicians, but why can’t we have enough flow experiences in the Jewish world? – one answer to the question “What does Jewish engagement mean to you”

This one is really lovely,

Jewish engagement means finding and honoring the intersection between the grand Jewish narrative and that of the Jew with whom I am engaging.

Another made me guffaw. And brought me down to earth (I had some lofty ideas!),

When I hear the expression “Jewish engagement,” I want to run in the opposite direction.

There are thoughts on community,

Our organizations need to model the Jewish community we want to see: a pluralistic network where Jews support one another through life transitions with love and authenticity.

And about a project that is actually an online community,

JEDLAB. The only place in the Jewish universe that invites everyone to speak up and have his or her own say. And then responds . . .

I tell this to rabbinical students: the second you think to yourself, ‘what should a rabbi say in this situation?,’ you’ve already lost them.

And person to person, bound by an idea or a place,

Jewish engagement is, to my mind, about the deeply human interaction between two individuals and some third “entity,” a big idea, a text, a value, or belief. In an “engaged” place, (we) allow the other person to change us, and the ideas to change us as well.

I don’t want to create a hierarchy, but invoking flow and being in the zone is just brilliant. I notice something similar to a runner’s high when I feel connected in a uniquely Jewish way. Not disembodied, but a lightness when entering another person’s frame of experience.

My own thinking is we can do more. I think Jewish engagement is about connecting honestly with another person even if it means leaving your comfort zone. And then taking that partnership into the world. Blog it, post it, share it, own it.

Then we can really shake things up.

Note: The responders include three people I met on social media (FB and Twitter) whom I now treasure as fellow travelers, one new email intro, and one friend for a decade. I love transparency, but it felt right to not reveal who they are.