Twitter has a funky internal chemistry.  Sort of like drops in a petri dish.  You can steer a conversation, but the fun begins with a dash of chaos.

Last week in Chicago, we had a chance to experiment.

My partner-organization, Healthy Schools Campaign, kicked off their signature event, Cooking Up Change.  Kid chefs compete in nine cities to make healthy, delicious, affordable school lunches. All this creates a “season of change.”  Winners go to a final round in Washington, and winning dishes are added to public school menus. The kids get a voice at the table.

Kids. Food. Social Media. Good cause.  How amazing!  Here’s how it played on Twitter.

We had a Tweetdeck set with necessary, scheduled messages.  The scheduler gave us freedom to work the room in realtime, reporting on the teams, quoting the students.

Some of the kids were taking pics and we invited them to post with us.  Their shots are so great.  They were the absolute stars.

Event goers and HSC enthusiasts joined forces in the Twittersphere.  We did not have a Twitter wall, so relied on key Tweeters to spread the word.  It worked.  The simplicity of the story — the contest — read very well online.

There was excitement across channels, and for the first time with this event, we made an ask for support.  We’re pleased that HSC’s Twitter metrics were all way up from the previous year.  Now working to roll that into more online and individual giving.

At the end of the evening, I got into the warehouse elevator to leave.  Exhausted, happy, totally spent.  I looked up to see one of HSC’s most vibrant Twitter followers.  We met online a few months ago, and this was our first face to face.  Instantly recognizing each other, we yelled and hugged.  The perfect end to a fantastic night.

Twitter chemistry is potent.  Cutting through the clutter with flair and feeling makes it real. 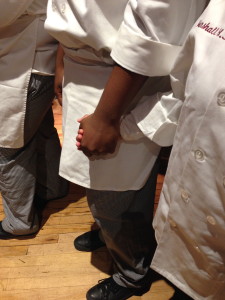