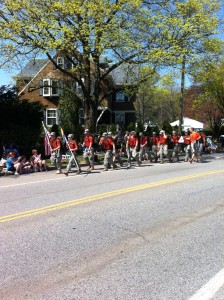 On 9/11, I was with two coworkers after our building was evacuated.  We were a quarter mile south of the Trade Center.  One, in her 60s,  hadn’t walked more than a few blocks in years.  She had just put on her high heel office shoes.  We walked up the FDR, got her over the median, then up the ramp to the Brooklyn Bridge.  It was dark, smoky, and we didn’t know what had happened.  I thought we had been bombed. We heard the towers were down, but knew little else.

There was a moment when the smoke was thick as a wall.  Impossible to see.  Breathing was awful.  I was worried my coworker might have a heart attack.  We had to decide whether to go forward, get on the bridge, and over to Brooklyn.  Or to backtrack.  Like a movie, a screaming woman emerged from the smoke telling us not to get on the bridge.  We had to choose.  It seemed like combat.

I think of that moment often.  We walked through the wall of debris, smoke, and ash to emerge into startling sunlight at the peak of the bridge.  We looked like the powdered sugar people you saw on the news. Then down, around, into Brooklyn Heights.  Another mile to home.

In 2002, the walk over the bridge was my way of claiming the city I love.

Now runners will have to do the same.  All of us really.  We know the risks of being out there, we know the immense pleasure and sense of community too.

With feet on the earth, the pavement, and the park trails, we connect to each other.  Runners raise billions of dollars, largely for health oriented non-profits.  On marathon day in any city, the locals are the banks and the runners a river of effort, pride, and celebration.

I know there are bad people out there.  I try not to live in fear.  I also know the sensation when danger is close, violence is real, and the stakes are high.  Marathon running has been polarizing this year, and people in Boston and NY have lost so much.  Now races, a place of respite and community, will have an edge of anxiety.

We will be out there.  The talk about upcoming events, pace hopes, team gatherings is amping up.  I hope my kids will watch many NY marathons and maybe run them some day.  Hope to see you in the park, or hear about your training.  Or meet you on a plane or train en route to a special race.

Blessings to Boston.  Waves of love and anger for those who were killed and injured. We will be holding the runners and spectators, victims and victors,  close and in our hearts for a long time.

A week ago today I ran the Paris Marathon.  I raised money for my charity, ran with my team, and had a remarkable out of country experience.

I started distance running about the same time I began consulting.  After years as a staffer working membership programs, I wanted to explore new turf.  Find out how different organizations relate to their donors.  And kick up my knowledge of fundraising with social media.

The running is personal.  I enjoy it, and have found the stereotypes largely true.  My life has changed, I’ve met incredible people, and I feel connected to city life by traversing streets, paths, and bridges.  After the long walk home on 9/11, running gives me peace in NYC.

Fundraising when I run is my value added.  Setting a goal, working with great organizations and trying new techniques bring my work into focus.  For charity race entry,  I employ different asks and acknowledgements.  I put myself out there. The scale is utterly different, but I believe it helps me encourage clients to take risks.

Blending my personal and professional pursuits moves me forward.  I’m proud of the money I raised to run in Paris for Leukemia & Lymphoma Society.  The fundrunning went very well!  I’m equally pleased to have been one of 1000 US runners in a field of 38,000 finishers.

I’m honing my skills and offerings this year.  An emphasis on the new and innovative, with a steady eye on stewardship and donor relations.  Stronger, efficient programs with clear, insightful messages.

I don’t usually promote or share race photos.  But this post is about transparency and freeing my activities from distinct corrals.  I look forward to more challenges, discoveries and team work.  Merci.